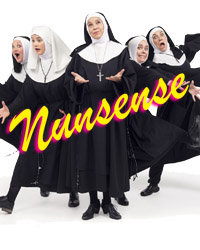 Nunsense is a hilarious spoof following the misadventures of five nuns trying to manage a fundraiser; the ballet-loving Sister Leo, street-wise Sister Robert Anne, befuddled Sister Mary Amnesia, the Mother Superior Sister Regina, and Mistress of the Novices Sister Mary Hubert. Together (mostly) they stage a talent show with large dreams and little talent. Laced with catchy, original songs, zany, irreverent, physical comedy and dancing from ballet to tap, Nunsense promises to keep audiences young and old rolling with laughter, the perfect antidote to the dark jim-jams of January! Fun for the entire family!With some of Vancouver’s finest (and funniest) professional actors under the brilliant leadership of director GILLIAN BARBER and her team, this promises to be an unforgettable night of laughter in the theatre.