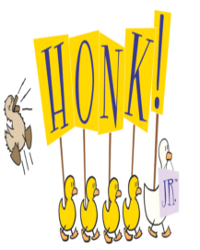 Honk! Jr is the musical re-telling of Hans Christian Anderson's 'The Ugly Duckling".

Winner of the “Olivier Award” for Best Musical (Britain's version of the Tony's...it even beat out "The Lion King" that year!), the show is filled with great music and a powerful message about being yourself.

Adapted for young performers, and with a score by George Stiles and Anthony Drewe (composer's of Broadway's Mary Poppins), Honk! Jr is a witty, hilarious and heartwarming celebration of being different that is sure to delight audiences of all ages.

Join Acting UP! Musical Theatre's company of young performers as they bring this timeless story to the Metro Theatre Stage!