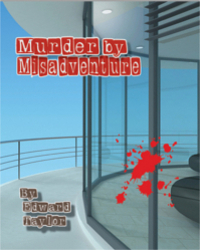 What happens when two writers who have worked together for years start to hate each other? The team has won awards and made money. Harry Kent has saved and invested and now lives with his glamorous wife in a sun drenched luxury flat high above the Sussex coast, where the play is set. It is a hi tech paradise with only one snag: it's build on the site of an Ancient British sacrificial stone where black magic was practiced and now there are strange noises in the night. Paul Riggs has spent his fees on booze and birds, and he lives in dread of bookies' heavies. Harry wants to break the partnership that is Paul's lifeline, but Paul knows a sinister secret from Harry's past. They are therefore locked together in a dance from which murder seems the only escape and they have just plotted the perfect crime for their latest TV film.